A delightful day at the Cheriton Recreation Ground, the sun shone, six teams turned up with their supporters and people drifted down from the Beer Festival.  The burgers were great big fat, juicy and tasty ones. The home made cakes were a treat. The ground looked great and played well -thanks Digger.  And Cheriton won! How did that happen? 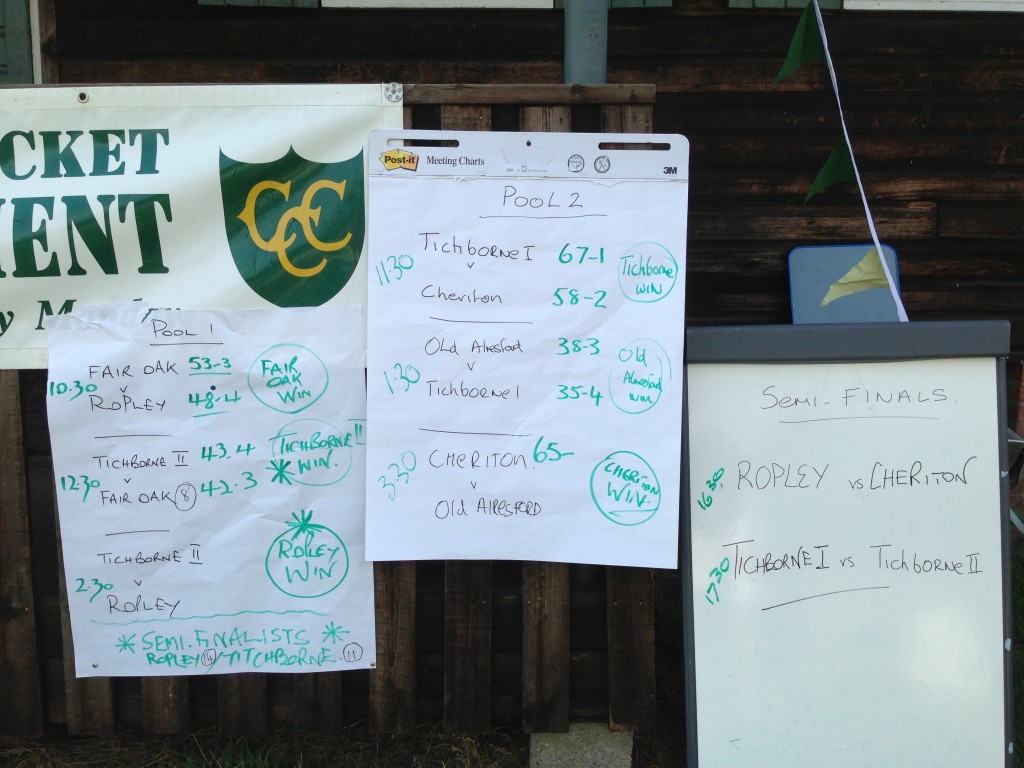 First there were the two Round Robin Leagues. Each team played two matches. They all won one and lost one.  As you can see clearly from the scoreboard opposite.  Who wrote the rules? A committee! Who had to decide who went through? Fergus Noble.

Everyone had 2 points and part of Rule 3 was invoked, principally the bit about scoring the most boundaries:

“In the event of two teams in the same Pool finishing level on points the winner of the match between those two teams in the Pool stage shall be placed ahead of the other. If that match ended in a tie the team that scored the most boundaries in their 2 Pool matches shall be placed ahead of the other, if still tied then the ranking will be determined by the team with the least wickets lost and if still tied then by the toss of a coin.”

Why this part of Rule 3 was in the Playing Schedule and not in Rule 5 is beyond me. 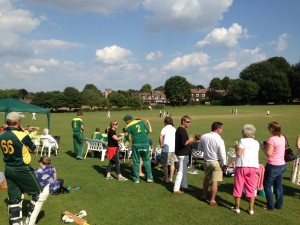 This meant the holders Fair Oak and Old Alresford were out.  Ropley 54-2 were beaten by Cheriton 55-2 in the first semi-final. I think this was only significant cricket accident of the day happened when the Ropley skipper, Andrew Walker, N0.2 (with his back towards you in the photo opposite) snapped something in his leg whilst running between the wickets in the final over. The Cheriton skipper, Nick Smith, said “That’s a dead ball”, after he was run out and the delivery was taken again with a new batsman.  It made no difference to Ropley.  Many thanks to the nurse for bandaging up the Andrew.

Tichborne Park had mixed their two VIs up. They were not a first and second VI but mixed sides. So it didn’t matter much to those watching, who won in their semi-final but it seemed to matter to them.

By now Fergus Noble, the Competition Organiser, had realised the Flowerpots Cup was not at the ground and the landlady Jo was. Amazingly a mobile phone call to the pub got through and the cup arrived in a very special Royal Mail Red car. Everything was now set for the final.  Please note Competition Organiser is a special title on the day for someone who has to take the can for any special decisions.  Several people had organised the day including Jules Anderson, who had fled to Marrakesh.

The light meters were taken away from the umpires (mostly players from other sides in the competition), who had done an excellent job all day, in combination with Marion Stanbrook the principal scorer.  The umpires in the final were a pro and Charlie Gabb.

Cheriton went in and scored a 61. A good score but certainly within Tichborne’s reach. Nick Smith opened and carried his bat, making 6! Nick Bolshaw arrived a little later in the innings and scored the majority of the runs. (When I get hold of the score book, I will get a bit more detailed). Mark Cheyney (I think) the keeper had to do a lot of running to the boundary in this innings, as either the Cheriton batsmen or his bowlers slipped the ball past him.

Tichborne got off to a reasonable start. After the second over they were close to the run rate and had not lost a wicket. Tom Lofts pinned them down for an over, bowling several dots. Then Harry Foyle took 3 catches mainly running in from the top of the field and  including one of the first ball of Oliver Moore’s over for the second time in the day. George Ayling took another good catch. Tichborne Park did not recover and Cheriton won.

The leading batsman and bowler awards went to:

Bowling: Ed Primmer, Tichborne Park for the Most Wickets

Batting Award: Will Gabb, Ropley for the Highest Score in an innnings

We cleared up and retired to the pub. But I missed that, having eaten a dodgy mushroom in the afternoon which reaped its revenge on me from 7:30pm and for several hours after that.

Yours,
The Reluctant Commentator